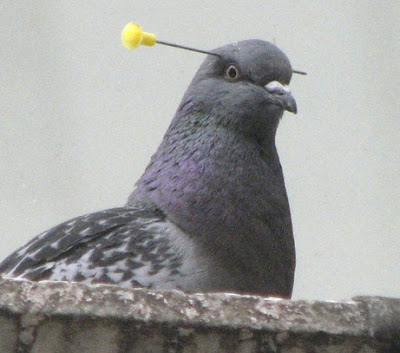 April 29, 2008—Pigeons in Seattle, Washington, are under attack by an unknown assailant with a dart gun, officials say.

Local authorities have received several reports of pigeons found in the city center with 3- to 4-inch (7.5- to 10-centimeter) metal darts through their skulls.

At least three birds, including the one pictured here, have been found alive with the needlelike projectiles lodged behind their eyes.

"This is just a horrifying case," Tori Perry, a cruelty case worker for People for the Ethical Treatment of Animals, told the Seattle Times.

"Someone who would do this to an animal is a short step away from doing this to a human being."

The darts appear to have been fired from a blow gun and have not penetrated the pigeons' brains, Perry said. The injuries, however, are likely to worsen and become infected, resulting in "a very, very painful death," she added.

The animal-rights group is offering a U.S. $2,000 reward for information about the attacks.

Meanwhile, local animal-control officials are puzzling over how, if at all, to capture and treat the birds.

"They are quite athletic, good fliers," said Don Baxter, enforcement supervisor for the Seattle Animal Shelter. "They're not hanging around waiting for an officer to get close."